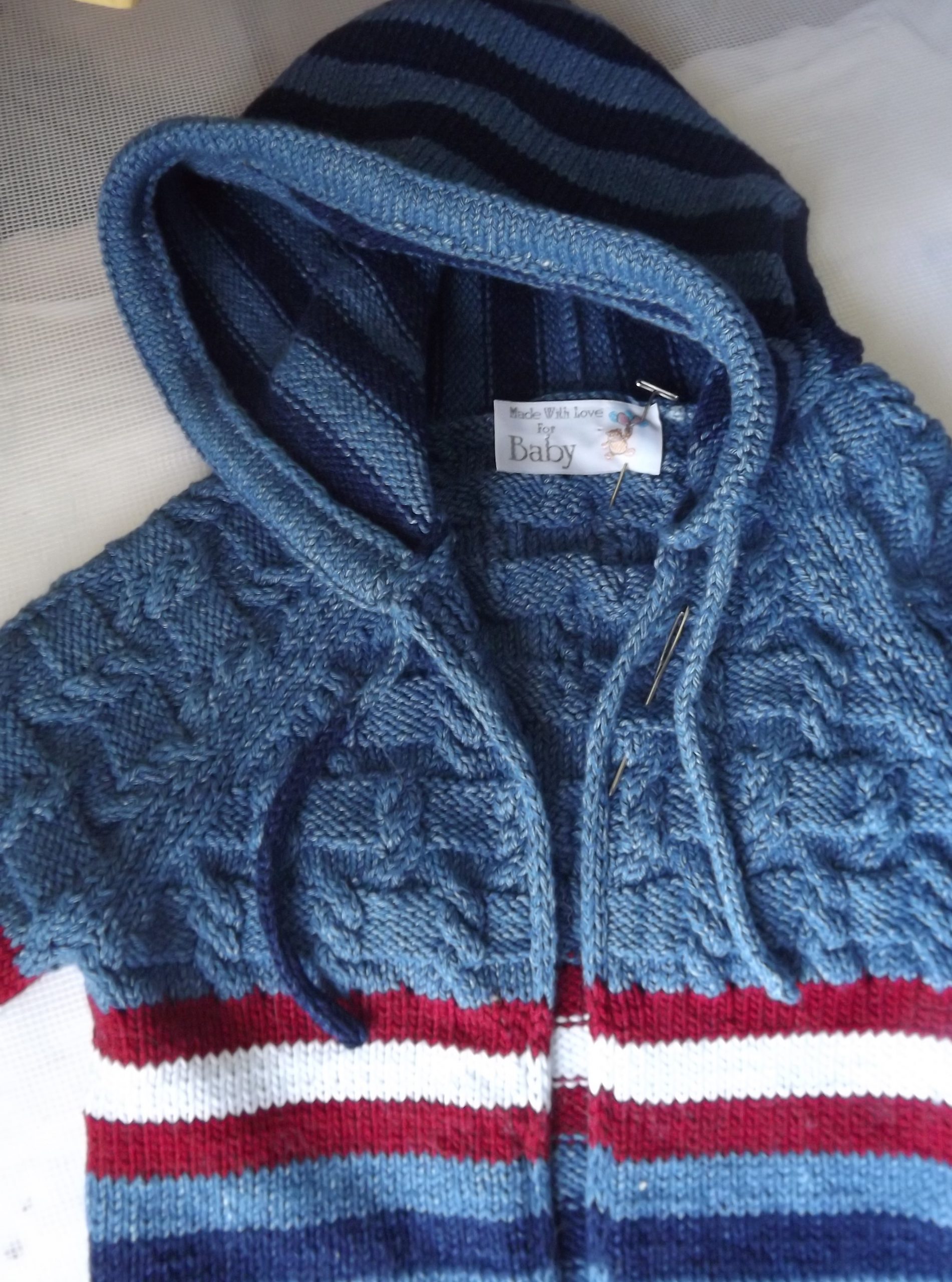 Following on from this post in which I reflected on the experience of being a Knit Stars student, I wanted to share a couple of the amazing stories from fellow Knit Stars students. Today I’m sharing this one from J Diane Oliver-Jensen in Ontario, Canada, which tracks the story of a special sweater through multiple seasons of Knit Stars. I love this story for its knitterly pride and for showing how an online learning resources – all the lessons, all in one place, watched over time and filled with tips and tricks – can build up confidence and skills over the course of several years. Thank you, J Diane, for sharing the story of your special sweater and signposting how its creation was informed by your participation in Knit Stars!

Can I tell you about a project, one singular project, that connects dots across multiple seasons tying in lessons I got from several different seasons? It starts with Season 3 of Knit Stars, during which Anne & Kay of Modern Daily Knitting were raving over Rowan Original Denim yarn and bemoaning the fact that it was going away forever. They showed a sweater worked in this yarn and how it ages so, so beautifully to highlight the cables yet wears like iron while still being soft and comfy – just like your best old jeans. I went on a mission to track down some remaining stock somewhere – anywhere – because I knew I needed it in my stash! I love knitting in natural fibres but have quite a few knit-recipients who need machine-washable yarns.

Then, about a year later (so this project dates to somewhere between Seasons 4 & 5), my sister-in-law announced that she was going to be a first time grandmother and asked if I might knit a special sweater for that grandbaby? She showed me a pattern that she really liked (a kids’ hooded cardigan) but could I make it in red, white & blue stripes, instead of rainbows? (We are in Canada, but the baby’s Dad works for Microsoft in Seattle WA so this grandbaby will be a dual citizen, hence the Red, White & Blue palette). I looked at the pattern but the detailing was not what I would have picked for knitting a special heirloom! Additionally, given the political climate of the times, I felt a screaming red, white & blue sweater would look and feel far too MAGA. I went looking for something similar that could be adapted and found a Martin Storey design for a kids’ striped, hooded pull over with nicely cable detailed shoulders designed to be knit in Rowan’s Original Denim.

Knit Stars addition #1 to the sweater.

I shared a picture of the pattern with my Sister in Law and offered to make the following changes:

I knew that Rowan’s Original Denim (ROD) had some inbuilt shrink that the patterns took into account and that the indigo dye would bleed so knew to be aware of colour bleeding. I knew I HAD to do some swatching in advance. I kept that in mind when I went searching for some compatible, machine-washable cotton yarns. I couldn’t find any that had both some planned shrinkage AND that came in a good bright red and white. One of my sources for ROD had been an LYS right here in Ontario, Canada. The yarn store owner recommended a mercerized cotton yarn that she carries (GORGEOUS bright red & white!) but then… how to compensate for the differences in shrinkage? Thankfully, also in Series 3 of Knit Stars was Carson Demers who focused on ergonomics in knitting. One of the topics he touched on, as had Anne & Kay I believe, was the difference that needle material makes to the gauge of stitches! Bingo! Knit Stars addition #2. Thanks to that, I knew enough to ASK how I ought to handle the difference and should I swap needle material as well as size to get final washed gauge to match? We worked out where I was going to use metal needles and where I was going to use wooden needles to accommodate the planned shrinkage of the ROD against the mercerized.

I then had to swatch with advanced purpose, Knit Stars addition #3! I had been converted to swatching from Knit Stars 1 and 2, but had never jumped onto the “wash your swatch” bandwagon. There was no doubt I HAD TO on this one, not only to test the potential shrink matching, but also to test the efficacy of Colour Catcher washing sheets to control the intentional colour bleeding of the ROD and the potential for same from the mercerized red. That worked! Yay!

Next, I needed to spend some time studying the pattern and how I was going to make the change from pullover to cardi. Fortunately there was a perfect line through the cabling pattern to eliminate 4 stitches straight up the front so that it would look intentional in the pattern. The closure ought to make little or no difference in the final garment dimensions and fit. I also knew I wanted a zip in the front and that on zip fronts I prefer the look of I-chord edging – but I had never yet used I-chords. I had to go back and study the use of integrated I-chord – which I did, via Stephen West’s Knit Stars Season 1 lessons: Knit Stars addition #4! It took a bit of stopping & starting, testing and rethinking to make my process fit & work with the pattern & charts (Oh yeah, reading charts! Knit Stars addition #5! Thank you Laura Nelson, Knit Stars series 2 and others! I should mention numerous Stars who offered tips and encouragement for adapting patterns to suit your style & needs! Make that Knit Stars addition #6!)

As I began working, I went back and referred to Series 2 and Michelle Wang’s wealth of tips and tricks for knitting to make the best finishing and added seam edge selvage stitches and modified how I worked decreases. Knit Stars addition #7.

Before Knit Stars, I’d have been really reticent to frog my knitting, as if the world would END if my precious stitches were undone by my own hands. Knit Stars got me over that mental block and now frogging is my friend. I can decide quite easily if a mistake is something I can live with or if I will be happier if I make it better. Most often now, I make it better! I used finishing techniques from Michelle Wang (so many tips & tricks… in my book she is a GODDESS!) and Meghan Fernandes (weaving in ends. Season 1)… And of course, the final washing (required for the ROD) & blocking that brought the finished product to life.

Pretty much every part of this project pays homage and owes something to the lessons I’ve learned from Knit Stars. So, when people ask me what I’ve gotten out of my investments, this is what I tell them and show them. This, and the emphatic assurance that I have found Knit Stars to be worth every single precious and limited penny I have spent. My knitting shows the rewards.

YES IT DOES! Thank you so much for telling us the story of this heirloom sweater, and for showing us how Knit Stars helped you make it!