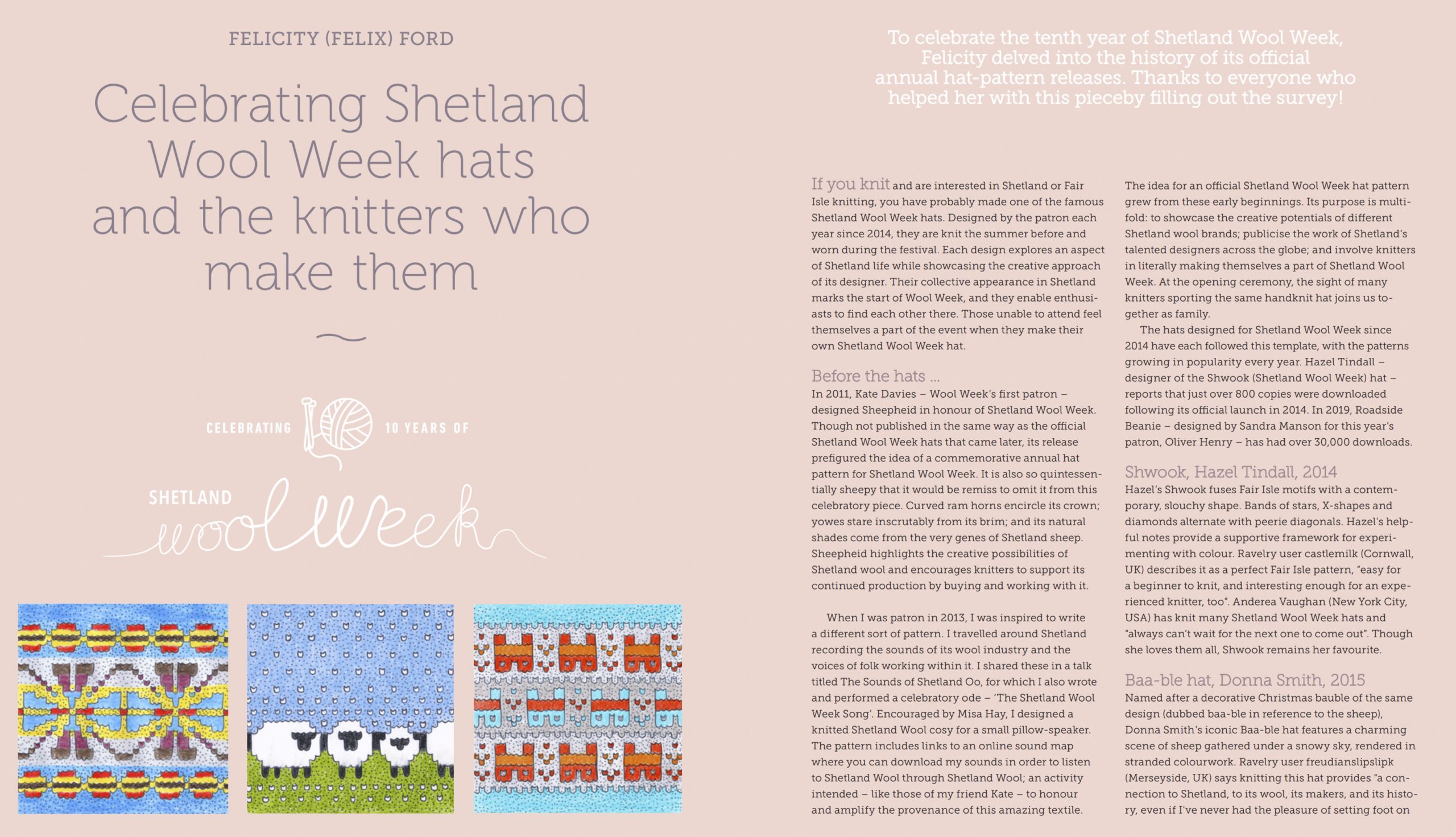 When I was writing about Bam & Pops’ visit to Shetland, I remembered that in 2019 – to commemorate the tenth year of Shetland Wool Week – I’d researched and written a piece for the Annual, celebrating Shetland Wool Week hats and the knitters who make them. I asked if it would be OK to republish that piece now that the 2019 annual is sadly out of print. Here is a bit more about these special hats, written and illustrated by me. First published in the Shetland Wool Week 2019 Annual and republished here with kind permission.

Celebrating Shetland Wool Week hats and the knitters who make them

To celebrate the tenth year of Shetland Wool Week, I’m delving into the history of its official annual hat-pattern releases. Thanks to everyone who helped with this piece by filling out my survey!

If you knit and are interested in Shetland or Fair Isle Knitting, you’ve probably made one or two of the famous Wool Week hats. Designed by the patron each year since 2014, they are knit through the summer and worn during the festival. Their collective appearance in Shetland marks the start of Wool Week, and they enable fibre enthusiasts to find each other there. They are great conversation-starters and each design explores an aspect of Shetland life, as well as showcasing the creative approach of its designer. Importantly, the Shetland Wool Week hat patterns enable knitters unable to attend Shetland Wool Week in person to feel part of it in a different way.

Though not published in the same way as the official Shetland Wool Week hats that came later, the release of Sheepheid prefigured the idea of a commemorative annual hat pattern to mark Shetland Wool Week. It is also so quintessentially sheepy that it would be remiss to omit it from this celebratory piece. Curved ram horns encircle its crown; yowes stare inscrutably from its brim; and the natural shades in which it’s worked come from the very genes of Shetland sheep. Sheepheid highlights the creative possibilities of Shetland wool and encourages knitters to support its continued production by buying and working with it. Kate published two further designs to coincide with Wool Week: Sixareen Kep (2012) and Tea Jenny (2013).

When I was patron in 2013, I was inspired to write a different sort of pattern. I travelled around Shetland recording the sounds of its wool industry and the voices of folk working within it. I shared these in a talk titled The Sounds of Shetland Oo, for which I also wrote and performed a celebratory ode – my Shetland Wool Week Song. Encouraged by Misa Hay, I designed a knitted cosy in which to encase a small pillow-speaker with Shetland wool. The pattern includes links to an online sound map where you can download my sounds in order to listen to Shetland Wool through Shetland Wool; an activity intended – like those of my friend Kate – to honour and amplify the provenance of this amazing textile.

The idea for an official Shetland Wool Week hat pattern grew from these early beginnings. Its purpose is multifold: to showcase the creative potentials of different Shetland wool brands; publicise the work of Shetland’s talented designers across the globe; and involve knitters in literally making themselves a part of Shetland Wool Week. At the opening ceremony, the sight of many knitters sporting the same handknit hat joins us together as family. The hats designed officially for Shetland Wool Week since 2014 have each followed this template, with the patterns growing in popularity every year. Hazel Tindall – designer of the Shwook (Shetland Wool Week) hat – reports that just over 800 copies were downloaded following its official launch in 2014. In 2019, Roadside Beanie – designed by Sandra Manson for this year’s patron, Oliver Henry – has had over 30,000 downloads.

Hazel’s Shwook fuses Fair Isle motifs with a contemporary, slouchy shape. Bands of stars, X-shapes and diamonds are interspersed by peerie (small) diagonal lines. Hazel’s helpful notes provide a supportive framework for experimenting with colour. Ravelry user castlemilk (Cornwall, UK) describes it as a perfect Fair Isle pattern, “easy for a beginner to knit, and interesting enough for an experienced knitter, too”. Anderea Vaughan (New York City, USA) has knit many Shetland Wool Week hats and “always can’t wait for the next one to come out”. Though she loves them all, Shwook remains her favourite, because of the opportunities it presents for exploring light and dark through the repeats: “I am very attracted to shapes vs. pictures of things; I think my mind process them better”.

Named after a decorative Christmas bauble of the same design (dubbed baa-ble in reference to the sheep), Donna Smith’s iconic Baa-ble Hat features a charming scene of sheep gathered under a snowy sky, rendered in stranded colourwork. Ravelry user freudianslipslipk (Merseyside, UK) says knitting this hat provides “a connection to Shetland, to its wool, its makers, and its history, even if I’ve never had the pleasure of setting foot on one of her islands. Yarn connects people, in the most tactile and profound of ways”. The Baa-ble Hat had a similar effect on Jeanne (Minnesota, USA) who saw it in a local yarn shop in 2015 and fell in love with it, sparking a conversation that has brought her to Shetland twice.

Ella Gordon’s playful Crofthoose Hat features cheerful rounds of croft houses. Ella says the imagery “speaks of a simpler time in Shetland. Historically Shetland was known for crofting, fishing and knitting. Obviously times have changed but these things are still part of many Shetlanders’ lives and to me the shape of a croft house sums up my culture and connection to this place.” Croft houses on hundreds of hats have given knitters a chance to engage with this aspect of Sheland’s history. As Anderea says, one of the main benefits of knitting the Shetland Wool Week Hats is getting to know each patron through their design and “being able to appreciate what their representation means to them”.

Gudrun Johnston’s Bousta Beanie celebrates Shetland’s textures and colours with an abstract, wavy motif. She found her colours in the landscape of the isles, “the blues of the sea, the mossy greens and browns of the hillside and the bright pops of wildflowers in the summer,” and observed that walking here and “soaking up its palette” in the salty Shetland wind reminds us of the need for a warm hat! Marsha, (Egypt) enjoyed making and, especially, wearing her hat: “I live in Cairo, so the only time I wore my hat was in Shetland”. With its easily memorised motif and a palette of just three shades, Bousta Beanie is ideal for knitters new to stranded colourwork. It’s proved oddly addictive for some folk like Wilma A, (Edinburgh, Scotland) who describes making “literally dozens of Bousta Beanies – most have gone to local refugee charity, some to friends… And they make terrific first colourwork projects and stash-busters”.

Elizabeth’s design was based on a fisherman’s kep displayed in the Boat Hall at the Shetland Museum and Archives. It features three delicate patterns, which – when worked in lighter shades – seem to twinkle against a background of darker wool. Elizabeth used “colours that remind me of the northern lights, or ‘merrie dancers’… a familiar sight to fishermen.” Yumi Shimada, (Tokyo, Japan) and Muriel Pensivy (Pays de la Loire, France) – neither of whom have been to Shetland (yet), knit these hats together last year for Wool Week. Muriel says they began to refer to their hats as “the friendship hat, as we dream about discovering Shetland together”.

This year’s hat celebrates Oliver Henry’s life as Shetland’s most famous Woolman with over fifty years’ experience of working with Shetland Oo. Oliver sketched memories from his life, which were then translated into Roadside Beanie by his talented colleague at the Shetland Wool Brokers, Sandra Manson. Oliver says “my Roadside Beanie features two common roadside sights in Shetland: Shetland sheep and fishing boats. Both of them have loomed large in my life as a Shetlander.” Ravelry user bonfire17 (Missouri, USA) is excited to travel to Wool Week for the very first time this year. She’s been making Roadside Beanie in preparation for this trip and has found the support she’s had from other knitters “as lovely as the hat”. Anderea says that when she reads Oliver’s design interpretation “it makes me appreciate it and see his perspective and appreciate his design… each of the patrons has a great story to tell”.

Shetland Wool Week has fans all over the world, but not everyone has the resources to make the journey there. The thoughtful hat patterns and their carefully-timed release enable a vast international audience to participate. MaryAnn (New Jersey, USA) is one of many knitters who has never travelled to Shetland; follows Wool Week avidly online; and – of course – has knitted all the hats. She says knitting each one “made me feel that if I couldn’t go to Shetland Wool Week, at least I was part of it through the pattern”. Another knitter – Pam (Canada) – says part of the magic of making your Wool Week hat is “knowing and seeing others all around the world doing the same”. Whether it’s standing in a room with many others who are wearing the same hat, or sharing online with friends working on the same project, there’s something really special about these hats and the ways in which they knit us together.

In the three years since writing this piece, there have been more hats and Patrons! In 2020 and 2021, world-famous Fair Isle expert and founder of Shetland Designer Wilma Malcolmson was patron. Wilma designed Katie’s Kep (2020) and Da Crofters Kep (2021) which honour the resourcefulness and creativity of her crofter parents, Katie and Tammy. Rooted in memories of growing up on a croft and informed by Wilma’s long career as a knitwear designer, these amazing hat designs took on a particular significance through multiple lock-downs and the cancellations of in-person Shetland Wool Week events. Folks from all over the world found profound comfort in making these hats and connecting – through their knitting – with their rich associations with crofting and domestic creativity. The spirit of this is captured in a beautiful piece titled More Than A Hat published in the 2020 Annual.

My hat design is named after the nickname for Whalsay, the ‘Bonnie Isle’. Living on an island means the sea is ever present in our lives. All the men in my family have worked on or near the sea. But although the ‘Bonnie Isle’ hat has a nautical theme, the patterns mean much more. The chain in the rib represents the link between us all during Shetland Wool Week; and the anchor, a common motif in Fair Isle knitting, symbolises a sense of keeping grounded, connected to what matters most, and able to cope with life’s challenges. The crown, a circle, is to me a spinning wheel and a tribute to my mother Ina Irvine. A prolific spinner and knitter, she was my inspiration.

With greatest thanks to all the amazing designers of Shetland Wool Week Hats, for the ways in which they connect us all, and – above all – for how they are, indeed, so much more than hats.

YOURS IN THE CONNECTIVITY OF WOOL AND PATTERN,
Until Soon –
Fx

Bam and Pops in Shetland