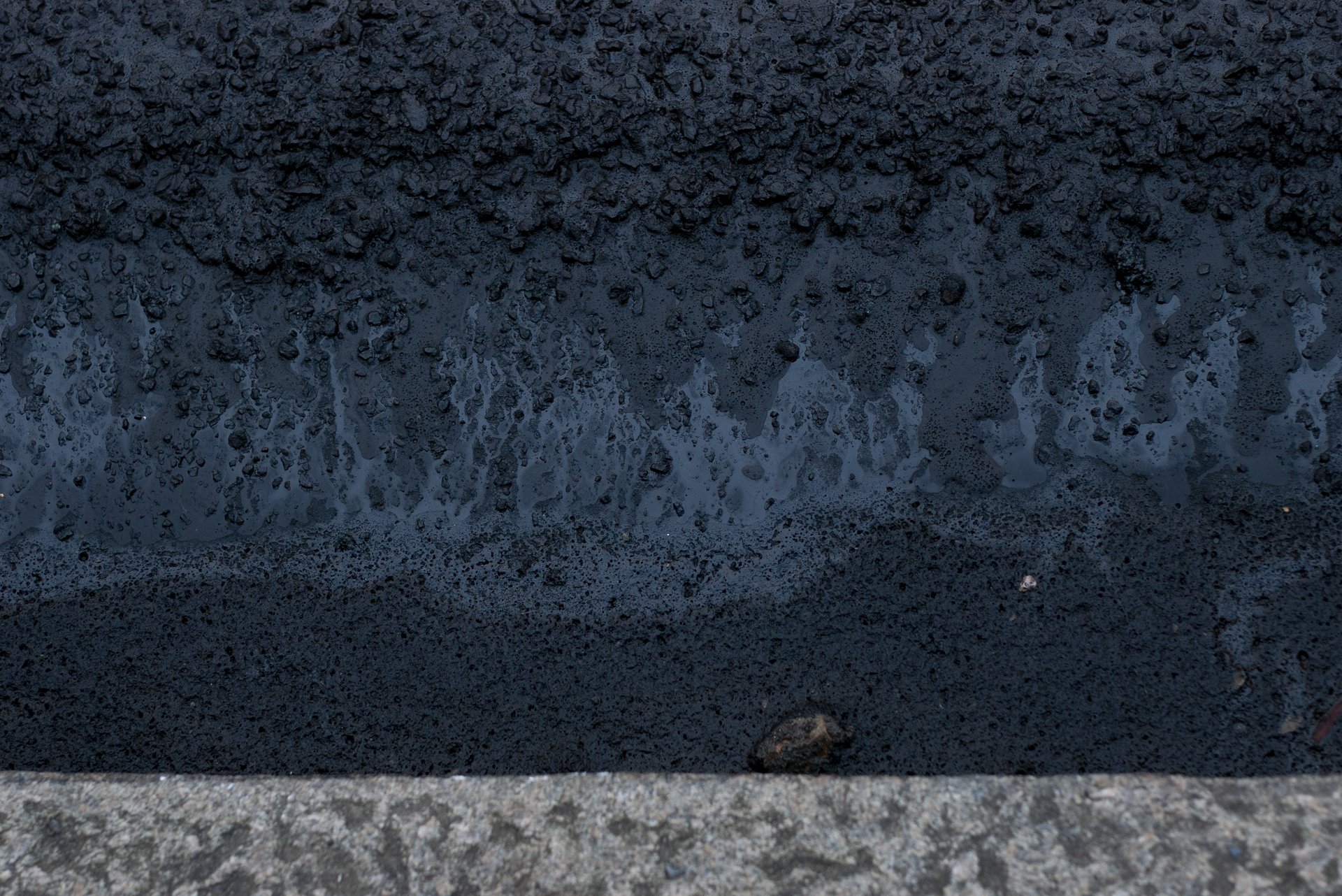 Today our street and several nearby are being resurfaced! Long-term readers who remember #TarmacTuesdays may appreciate my excitement over this process. It’s been amazing to watch and very strange to experience the street with no cars on it and this completely untouched, brand-new surface.

The company doing this work posted fliers through all our doors about how the process works – something I really appreciated in terms of transparency and accessibility, but also because it reads like a craft process or a recipe and is a firm reminder of our roads and streets as made – and maintained – spaces.

In honour of the auspicious occasion of our new road surface, I thought that today I would publish my essay from the KNITSONIK Stranded Colourwork Playbook. This essay gives the design context for the bunting pattern included in the Playbook and devised by my friend Liz. We collaborated on the colourwork designs for the flags in a process which is also presented in the book along with full charts. All the flags celebrate tarmac in one way or another, and are based on photos taken and shared by KNITSONIK friends, under the #TarmacTuesdays hashtag between 2015 – 2018.

The premise behind Tarmac Tuesdays is deceptively simple: on Tuesdays, people the world over use their smartphones, social media accounts and the hashtag #TarmacTuesday to photograph local tarmac and share their pictures online. Anyone can participate. As boring as that may sound, (pictures of tarmac, really?) in practice, Tarmac Tuesdays reveal the very opposite: that sharing images of tarmac can be both life-affirming and joyous.

Tarmac Tuesdays were the idea of Gemma Dudley and Coranda Berry. They came up with the concept and its pleasingly alliterative hashtag in 2015 after hearing me speak at the Edinburgh Yarn Festival about designing stranded colourwork inspired by my favourite A-road – the A4074 – for my first book, the KNITSONIK Stranded Colourwork Sourcebook.

In my talk, I was so enthusiastic about the creative potentials of tarmac as a source of knitterly inspiration that Gemma and Coranda wanted to invite comrades around the globe to begin a collective investigation of this often-overlooked context. Since Tarmac Tuesdays began, over a thousand images have been shared. Occasionally a shiny car turns up in the feed, documented by and for a different user group. When these cars appear amidst all the carefully curated images of road paint, weeds, and subtly different hues of tarmac, they are a happy reminder that our digital spaces are shared – just like our real streets and roads.

THE IMAGERY OF TARMAC TUESDAYS

Ongoing and time-based, Tarmac Tuesdays reveal the pattern of the seasons in an understated way. Blossom is scattered images uploaded in spring; irrepressible weeds at the road’s edge appear through summer; autumn brings freshly fallen leaves to the hashtag feed; and in winter, comrades share pictures of tarmac laced with frost and snowy tyre prints.

The way light plays on road surfaces transforms their appearance through the year, too; and posts often reveal the life of tarmac itself through the feet and tyres that mark it, and through the repair work that sustains it. In the hands of Tarmac Tuesday participants, tarmac is apprehended as the mutable and ever-changing surface on which much of modern life unfolds. From subtly different documentations of daily walks and familiar pathways through to holiday snaps of road markings and unfamiliar surfaces documented abroad, the images accumulated through this hashtag provide an ongoing source of fun and interest.

Tarmac Tuesday images uncover the surprising array of colours that can be found by looking curiously at the roads and pathways we use; but they also reveal the endless creativity, playfulness and inquisitiveness of their creators. Participants use ingenuity to showcase everyday elements of our roads in ways that help us see them with fresh, appreciative eyes: interesting camera angles turn tarmac and road paint into abstract compositions of texture and pigment; an uncynical eye celebrates a patch of freshly laid tarmac as a visible mend in the urban landscape; and shoes that match road-paint commemorate our indivisible relationship with the built environments that most of us call home. Tarmac Tuesday uploads celebrate the artistic potential of this everyday reality. By participating, creators affirm the idea that we do not necessarily have to go somewhere special to see something amazing; that inspiration can often be found right under our feet.

In his wonderful book On Roads, Joe Moran asks what we might discover when examining the road “if we look beyond its surface sameness and reimagine it not as a monotonous line… but as the real, concrete space in which we spend much of our lives”. In Tarmac Tuesdays photos we find some answers to his question. We see the moments when a negative print is created by a leaf falling in the path of a road-marking machine; when a sewer manhole is painted blue for engineering purposes; when a pom-pom or an earbud are lost; and the exact point when all the blooming trees of spring begin to shed their petals.

In this ever-expanding collection of imagery, we also glimpse the moments in which participating in Tarmac Tuesdays makes someone pause to notice something joyful while waiting for the bus; while on their way to work; while taking a daily walk. This lends glee and mischief to the time we spend in transit, moving on tarmac. Rather than seeing such intervals as dead space between point A and point B, Tarmac Tuesdays celebrate their familiarity, honouring them as real places in which we live, and providing opportunities to share and connect with other people in those moments.

Participating in Tarmac Tuesdays lets each of us know that we are not the only one to perceive and enjoy small details of the everyday landscape. It also allows us to reclaim a small degree of ownership over land that has been given over to cars, bikes and the flow of goods in lorries round the world. Through finding ways to reframe this land, to make it ours, and to turn it into miniature abstracts shared with a smile, Tarmac Tuesdays bring joy and wonder to a context broadly considered ugly and an affront to romantic ideas of landscape. Anonymous intersections crammed with noise and traffic become the spot where we find pleasing combinations of white and blue, or the site where we notice that the grey ground is in fact speckled and filled with subtle hues. Tarmac Tuesday crystallise these ephemeral moments as landmarks on personal treasure maps.

Entwined with the comradely nature of our celebration, the commonalities governing our shared images and the ubiquity of tarmac itself, this collective venture is really about specialness and rarity. The genius of Gemma and Coranda’s invention is that while Tarmac Tuesdays provide weekly opportunities to contemplate the poetics of tarmac, they also reveal the colourful and uncommon personalities of its fans.

With thanks to the many friends and fans of #TarmacTuesdays who participated in this project between 2015 and 2018 and especially to those of you who allowed Liz and I to develop stranded colourwork motifs based on your photos, and to include them in the KNITSONIK Stranded Colourwork Playbook: Anna Maltz, Charlotte Vanessa Dadswell, Emily K Williams, Gemma Dudley, Hannah Patch, Judith Korving, Lisa Jayne Canham, Marj Clark, Muriel Pensivy, Nadine Haarich, Nora L. Howley, Randi DeLisle, Ruth Wilson, S.L. Reynolds, Theresa Shingler, Tjitske Kamphuis, Vivienne Ravenhill and Wendy Booth.