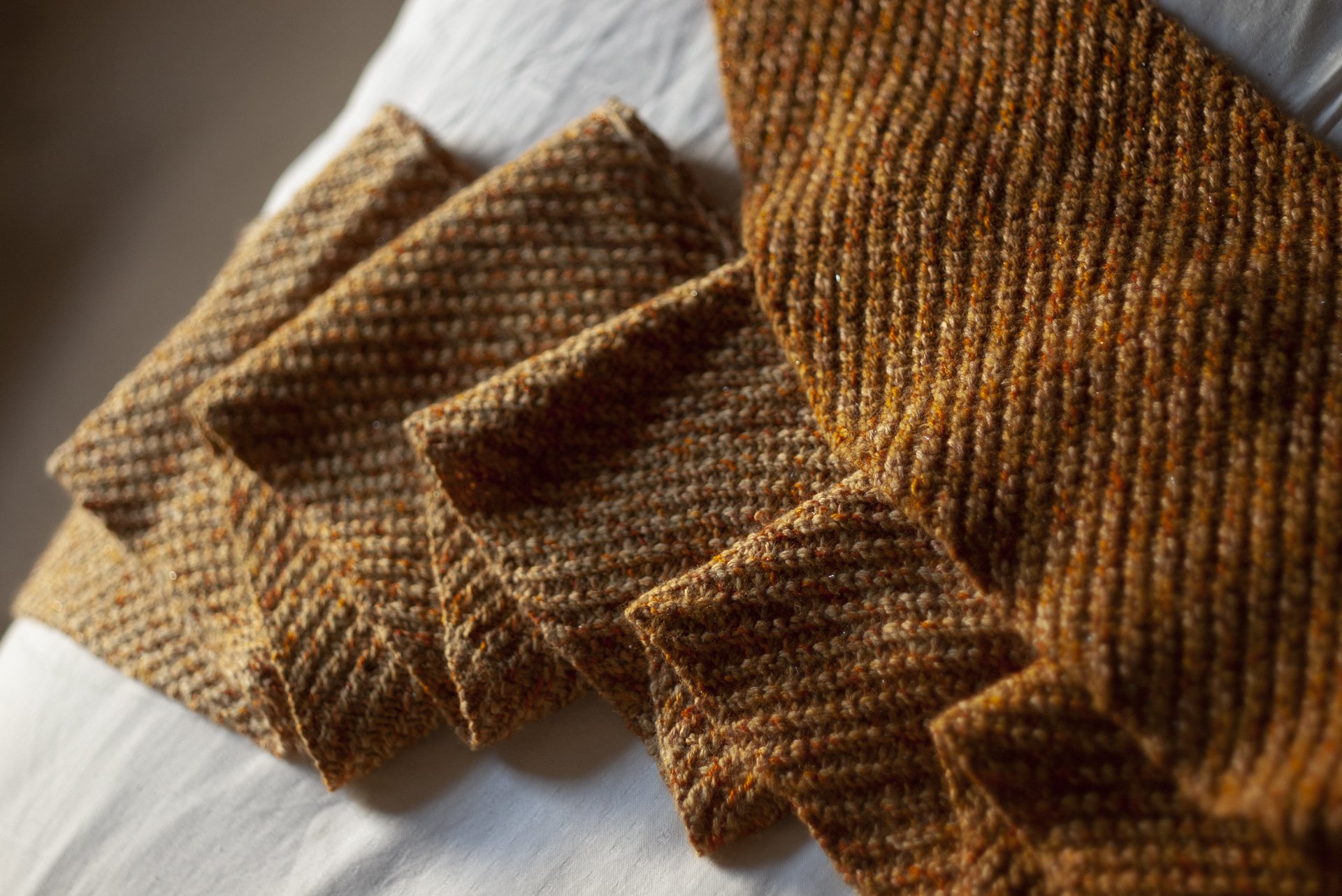 Do you remember when I wrote this post about saving plants from my garden with which to make a basket? Some time back in November I did finally manage to conclude this creative adventure.

This hairy little basket is made of ivy, nettles and hazel from my own garden and is just the right size for collecting treasures. I made it following the highly recommended Ivy Frame Basket tutorial from Foraged Fibres.

A few weeks ago I wrote about the beginnings of my version of the Parallelogram Scarf by Cecelia Campochiaro.

This pattern is designed to show off the beauty of two variegated yarns running in tandem, however I opted instead to use two semi-solid yarns I dyed myself, held double with John Arbon’s KBN mini-skeins in a sequence from dark to light.

My hope was for a long, joyful scarf invoking the gradient on a poured pint of beer or the light centre to the dark crust on a freshly-baked biscuit and I’m really pleased that the end result does indeed have these associations (at least to me).

Because the semi-solid DIY-dyed yarns run all the way through from start to finish, the gradient is subtle, but it’s definitely there and you can see that things run from dark to light when the points of the scarf fall together. It’s really long and I still have yarn left over, so I think the next thing will be the hat from Cecilia’s other MDK booklet: MARLS.

I really want to celebrate this lovely design as an IDEAL project for the festive season and for a long period of time in which I have had no spoons and frequently felt unwell. I picked it up and worked on it whenever there was a spare moment. It’s a simple stitch pattern but the design has so much interest. The way the numbers influence the stitch pattern! The bias-fabric! How these two things influence the appearance of the gradient! So although this was definitely a meditative and relaxing knit, it was also creatively rewarding and just the perfect introduction to the glorious concept of SEQUENCE KNITTING. Thank you, Cecelia!

I love the time-frames for these projects – the time lapsed between gathering ivy in my garden last year, and that ivy becoming a basket; the 10+ years between dyeing my beer and biscuit yarns and finding a project in which to use them.

However, January reminded me of some even longer creative time-frames. Every year for Christmas, I like to assemble meaningful gifts for my niblings. This year I became obsessed with giving them things I remember from my own childhood: stationery, stamps and address books for writing letters, and a stock book in which to collect stamps. In revisiting these creative contexts from my own childhood, I found myself poring over my childhood stamp collection from the 1980s.

Baby Felix was deeply enamoured with stamps but also had a somewhat erratic approach to organising and cataloguing them and a pretty poor grasp on geography and geopolitics. It was really moving and thought-provoking to revisit my old stamps, though, and I spent some time in December putting them in the right place in the album; separating stamps by currency (not having d and p UK stamps together, for example); ordering sets by value; and adding in some of the stamps that I’d collected in the interim – such as many beautiful stamps from Ireland, attached to letters from a very dear friend.

My old stamp album is filled with nostalgia and memories. Although I was never that excited about the monarchy, I did LOVE the huge number of different colours of the basic values stamps we have here in the UK featuring the head of Queen Elizabeth 2. I recall endlessly organising this mosaic of identical-but-not collection of different, low-value stamps and there is still something pleasing about all these different versions of the same thing seen side by side.

I also loved seeing different languages – and different alphabet character – on stamps… and how museum pieces, flora and fauna from around the world appeared and were represented on them.

When I started collecting stamps, several territories were represented which no longer exist: Yugoslavia, Czechoslovakia, The DDR – German Democratic Republic… and I seem not to have collected any stamps in the 1980s from Russia, China, or the USA. Poring over the presences and absences represented in my childhood album with older eyes, I’ve been thinking a lot about how at its best, a stamp is a utopian expression of place: a celebration of identity, culture and geography. Yet at its worst, a stamp can also be cold, harsh evidence of imperialism, shifting territories, ideologies, annexations and power. Maybe in one sense the magic thing about stamps is that they connect seismic historic shifts with the lives and communications of ordinary people who need to post letters to friends, loved ones, family.

I don’t think I had such ideas in the early 1980s – I was way more excited about the pictures and colours than what they meant – but in the course of revisiting my old album I remembered an old sketch-pad from 2001/2002 when I was at art school and working on a site-specific undergraduate project that I decided to base on a bookshop café (now sadly gone: The Winding Stair, in Dublin… does anyone remember it?).

I seem to have spent ages in said café smoking cigarettes, drinking coffees and feverishly writing in my notepad about the origins of these material substances in the global south; unfair labour practices; the massive inequalities between developed and developing nations; and the connections between these complicated narratives and the tools of writing: letters, postcards and stamps. I made many collages, rants and drawings in my notebook. I concluded my project by producing home-made postcards with images of stamps on them related to the production of coffee, tobacco, sugar and tea, which I then hid all over the café for people to find and write and send, should they so wish.

This doesn’t strike me as a particularly successful or clever project and I’m sure anyone who found my postcards was bemused by them and unlikely to join the dots across my rather complicated ideas. However, it was interesting to remember this chapter in the context of my lifelong interest in stamps and my thoughts about them now.

In the same old sketchpad as the stamp collages and rants, something lovely: a buttery serviette, carefully stuck in and dated to January 2002. Nearby, a sort of manifesto for art- another long idea, or set of ideas – that I seem to carry with me, still;

THE PROJECT IS TOO BIG. WHAT DO I NEED TO KEEP?
The Magic Inherent in everyday things.
1. TAKE SOMETHING SEEIMINGLY INSIGNIFICANT
2. DRAW ATTENTION TO IT BY USING CREATIVE MEANS
3. HOW?
4. WHY?

Perhaps this is the best “long idea” of them all – certainly it is the one that is never finished, and the one that guides me still.
I hope that whatever 2022 has brought for you so far, you are finding joy and creativity in the gloom.

Yours in baskets, biscuits, bricks, stamps and buttery old serviettes – but most of all yours in searching for ways to celebrate the magic in everyday things.

11 thoughts on “The Long Ideas”