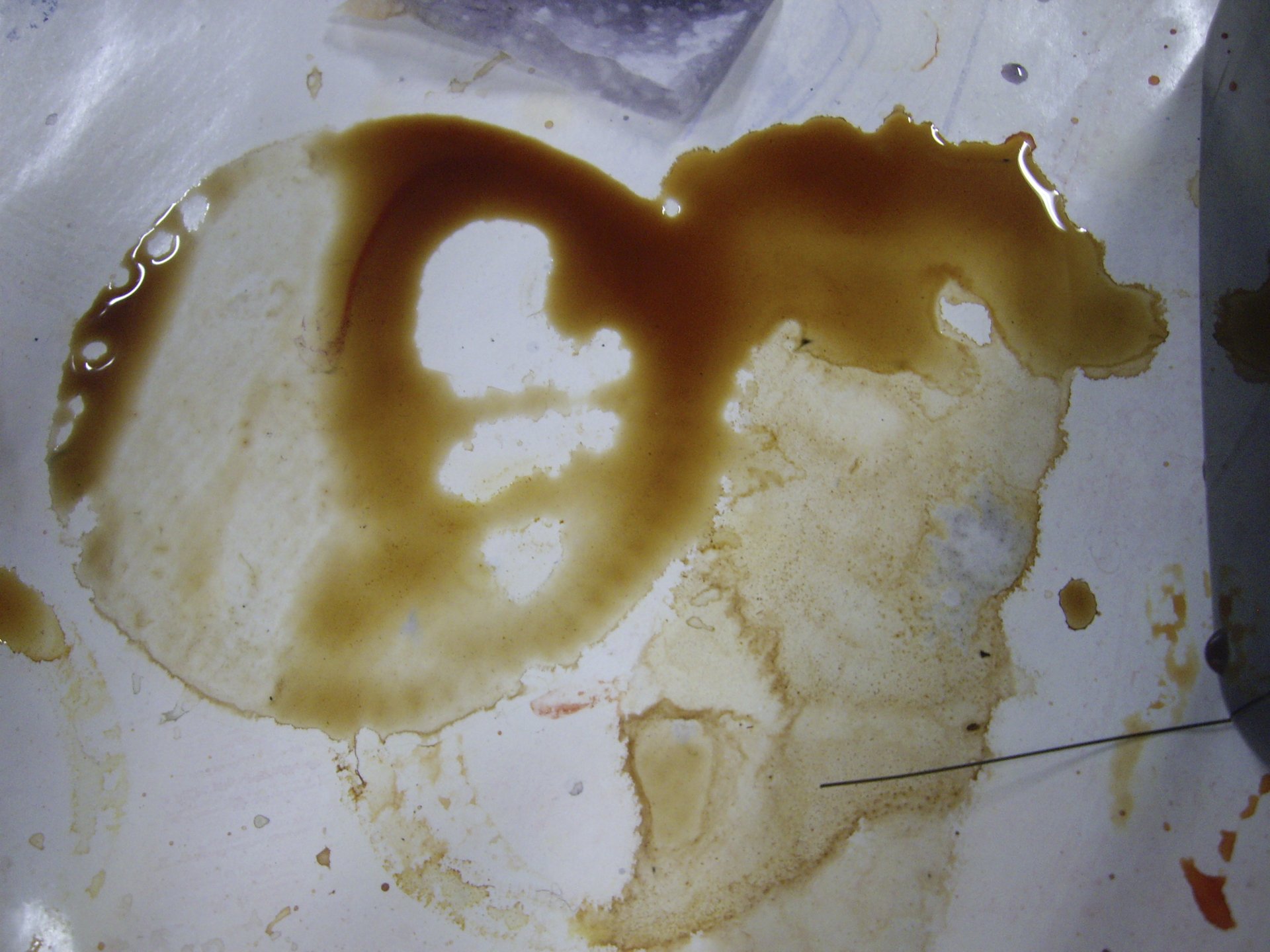 Almost eleven years ago, to celebrate our friend Liz’s upcoming wedding, a few Oxford Bluestockings knitters piled into cars and drove to the dye studio then run by Fyberspates. A very happy afternoon of dyeing ensued.

This is all the yarn we dyed that day, on a variety of bases.

The sparkly one (I think?) is a lace weight base with some shiny plastic? Metal? fibres in it; the lustrous yarns are of a fingering weight silk/Bluefaced Leicester blend, and the matt yarns are also a fingering-weight yarn, this time comprised of superwash-treated Bluefaced Leicester wool… but I might well be misremembering the details here as it was rather a long time ago. We each dyed 100g of each base, leaving with three special hanks of yarn. To combat the overwhelm of ALL THE POSSIBLE OPTIONS and INFINITE COLOURS I decided to use the research I had been doing into Reading’s history of producing Biscuits (Huntley & Palmers Biscuit Factory), Beer (The Simmonds Brewery) and Bricks (the brickwork of my town) as inspiration for three colourways and this is what I made.

I love these yarns and their special connections to memories and experiences, but because I have only one skein of each colourway and they are unrepeatable, it’s not been practical for me to design anything with them. Also, my fascination with stranded colourwork which quickly followed this spree of dyeing lends itself to less complex colourways and in my opinion generally works best with toothier, woollier wools. For these and other reasons the skeins have sat around for the last decade being put in and out of storage while I’ve dithered about what special project I might use them for. Like little friends they have migrated around my various crafting areas, exercising their beery, biscuity and bricky influences on my other projects. I did use the brick-inspired shade to start designing a colourwork hat, but there are no photos of this and it’s in deep storage – perhaps to be revisited after I finish writing this post.

But a few weeks ago – horrors! – I discovered MOTH in the bottom of the beer-inspired yarn. My bad. It was hanging around untended on a cluttered desk and I was distracted with other things. I unwound the cake, remade it into a skein and gave it a light washing. Luckily there were only a couple of small breaks in the yarn, but washing and rewinding the skein inspired me to want to do more with it – and to pair it with the biscuit-inspired yarn, so that these special skeins could become something I’d really wear. The project needed to not be fussy or holey at the end; it needed to be quite big as there is a lot of yardage in these two skeins; and it needed to do something fun with colour. Rummaging around the Internet for projects for 2 x 100g skeins of fingering(ish) weight yarn, my wish-list kept leading me to the Parallelogram Scarf by Cecelia Campochiaro. This pattern is published by Modern Daily Knitting and offers a wonderfully accessible entry-point into Cecelia’s brilliant concept of Sequence Knitting. The booklet in which it appears is titled, simply, Sequences. For those of you not familiar with Cecelia’s “unvented” technique, it’s an exciting and engaging but also surprisingly simple premise; a system for reframing our relationship to the underlying maths of knitting. In Sequence Knitting, basic sequences of knit and purl stitches are repeated over different stitch-counts to produce complex and beautiful textured fabrics. I’ve loved this idea ever since I first heard about it, and since reading my friend Tom’s interview with Cecilia from several years back. I’m not good with things in the abstract, however, and realised the best way for me to get to grips with Cecilia’s technique would be to JUST DO IT.

The pattern is really clever and easy to memorise – it’s k2,p2 but worked on the bias and on a multiple of stitches that is NOT 4 so that the purl and knit stitches are never allowed to stack up as they might in 2 x 2 ribbing, say. Instead, because of the bias fabric and irregular stitch count, they proliferate as a lovely rhythm across the work. The purl bumps and knit stitches work together to blur and blend the colours of the two shades of yarn you are using – in my case, Beer and Biscuits. However, the joy in all the examples I saw online – and in Sequences – is all about the way that two gradient yarns interact when melded and striped through the pattern. My yarns are not gradients but semi-solids.

How to avoid boredom and an overly stripy effect? Why – I could hold each yarn double with another yarn, to produce a gradient… an action which would also even out the slightly uneven weight-relationship between my two yarns (I think the Beer yarn is much finer than the Biscuit yarn…). After a year of knitting and designing with Knit By Numbers 4 Ply from John Arbon, I realised I could make my own gradients by choosing a whole set of grain-coloured yarns and pairing them with my Beer and Biscuit, to produce a scarf which uses both Marling and Sequence knitting to soothing and joyous effect.

If you imagine a whole set of John Arbon Knit By Numbers mini-skeins in the grainy/yellow ochre colourway, there are six shades in total, ranging from deep ochre to a sort of clotted cream colour. From darkest/most saturated, to lightest/most diluted, the colours are as follow: 110, 111, 112, 113, 114, 115. If you add the pure white – shade 055 – you have seven shades.

To work the pattern, I’m simply knitting it with the Biscuit-inspired yarn held together with shade 111, until shade 111 runs out, at which point I introduce shade 113. I’m striping this marled yarn together with the Beer-inspired yarn held together with shade 110, until 110 runs out, at which point I introduce shade 112. So if you can imagine, the whole scarf is made of stripes of the Biscuit-inspired yarn shade and the Beer-inspired yarn shade, but with a subtle gradient of mustard yellow working alongside each yarn. I’m hoping the end result will have a very exciting gradient effect not unlike the run from the bottom of a pint glass to the top, right after a tasty ale has been poured… or like the shading witnessed on a homemade biscuit, with golden/darker edges running to a paler centre. So far I’m especially enjoying how using John Arbon’s non-superwash KBN yarn lends a soft, mattifying sheepness to the fabric, while the special hand-dyed superwash bases consolidate special memories, colours and associations into the scarf with occasional bits of sparkle.

I thought I’d write up this process in case it’s helpful to anyone else who maybe has two random skeins of fingering-weight (ish) yarn lingering in your stash, and ready for recuperation through marled gradients and sequences…

Also, if you are like me and obsessed with finding THE RIGHT PIN FOR YOUR PROJECT BAG TO GO WITH YOUR KNITTING, I couldn’t have been happier to find this pin from Channy Peas Corner, stocked by my friends at AC Techniques.

All in all, the perfect collection of soothing colours, special yarns, magical pins and easy knitting to enjoy on my needles over the festive season. I hope you have something similar to ease the way forward through the darkest days of winter and hopefully into a much brighter and more hopeful 2022.

Until soon,
YOURS IN BRICKS AND BISCUITS,
Fx

3 thoughts on “Biscuits and Bricks”