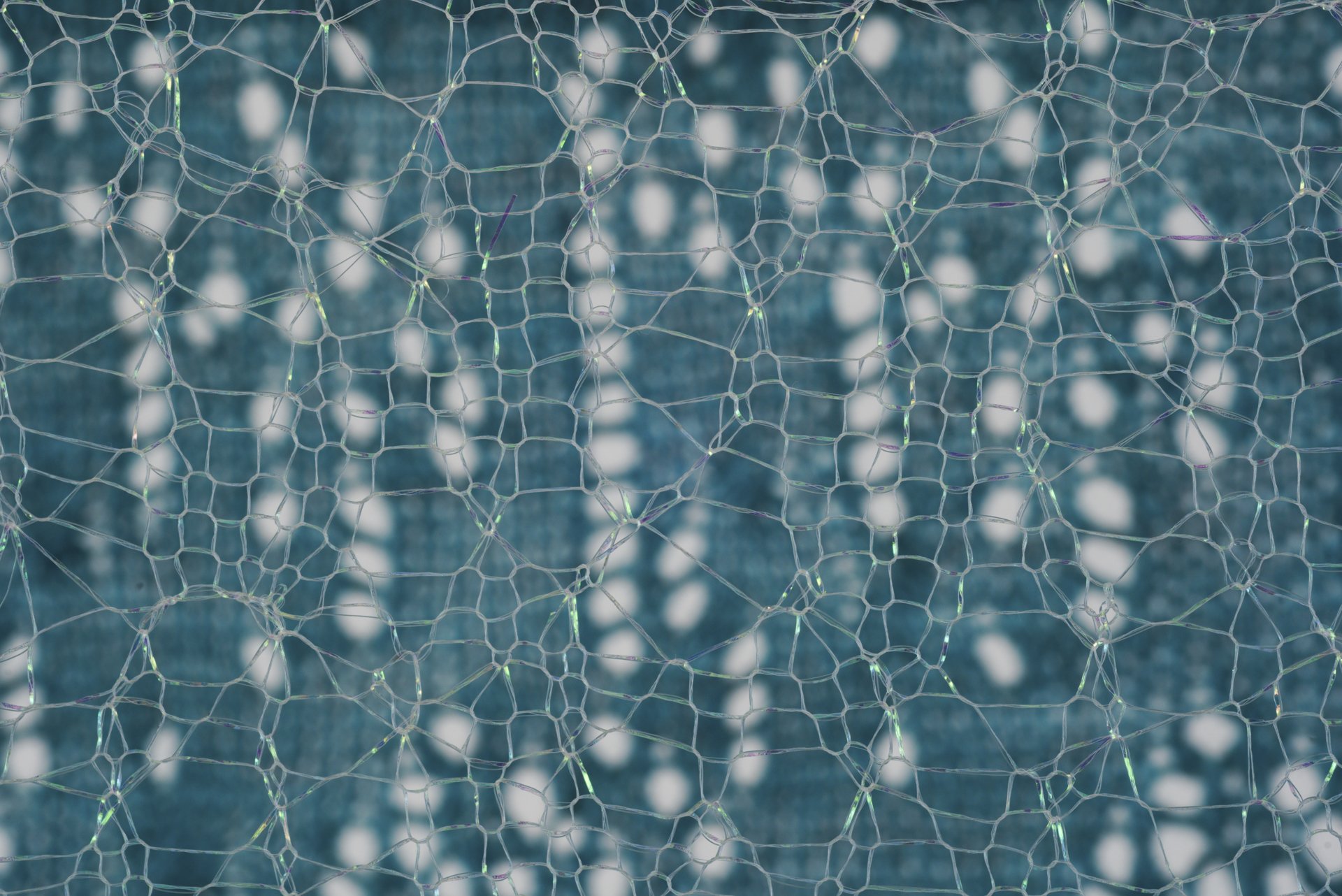 Remember the Yarnadelic Remixes 0.1 project mentioned a few posts back?

Today I want to announce the amazing commission produced by the artist Lorna Hamilton-Brown as part of this project. Lorna’s new work – Woman Blue – Elevate – is a powerful creative response to our work with punch-cards for music-boxes, and to our research into the song Woman Blue, which inspired Muriel’s hand-knitted design, Woman In All The Blues (more on that another time). Lorna’s piece honours a young woman whose name is not known, but whose legacy lives on in music. Lorna has selected this powerful work as one of the pieces she will be showing at the forthcoming Crafts Council exhibition, We Gather. Lorna’s piece, Woman Blue – Elevate, speaks to the themes of the exhibition on multiple levels and adds new layers to the long and complex story of a song.

Woman Blue – also sometimes known as I Know You Rider after the main lines of its chorus – has its roots in Blind Lemon Jefferson’s Deceitful Brownskin Blues (released as a single in 1927) and in the melody (but not the words) of Lucille Bogan’s B.D. Woman Blues (c. 1935). All the popular folk and rock versions of the song can be traced back to a version recorded in the 1934 book, American Ballads and Folk Songs. This influential tome was compiled by John (father) and Alan (son) Lomax. The Lomaxes’ early recordings of folk music from different communities both preserve that music and problematise our understanding of it.

The Lomaxes attributed the song Woman Blue to “an eighteen-year-old black girl, in prison for murder” who “sang the song and the final stanza of these blues”. Because the song is written down it has been preserved, but the partial and sensationalist nature of the information offered along with the song is deeply problematic and clearly reflects the historic dynamics of sexism and racism at work when the song was recorded and when the book was published. This was 1930s America; the unequal footing between white men with publishing resources and platforms and incarcerated Black women is very clearly apparent. After hearing the song, the Lomaxes added verses to the stanza given by the original singer and tinkered in who knows what other ways with her tune and melody. Crucially, leaving her name out of the record has ensured that attribution and any rights or royalties have never been able to be returned to this unnamed singer. As folk musician Bob Coltman – the first musician to record and popularise the song in the 1950s – puts it:

The unnamed Lomax source (doesn’t that frost ya? couldn’t they have given her name? or did they think that would have endangered her in prison?) is the originator of the core song. Wish we knew her name so we could credit her.

It’s actually not clear that she was the originator of the song – a spookily similar version appears around a minute into the song Prison Rider Blues, recorded at Parchman Penitentiary in 1933, suggesting that there were a few versions around at one time – but due to the lack of caretaking, respect and ethics in early field-recording practices, we shall never know the truth. She is certainly the person from whom the Lomaxes took the song.

After arranging and covering the song, Bob Coltman taught it to Tossi Aaron who – together with Joan Baez – released a version in 1960. This was followed by versions by the Kingston Trio, John Renbourn and Judy Roderick’s 1965 version of the song – which is the version that inspired the Yarnadelic colourway Woman in Blue. Growing in popularity in rock circles through the 1960s, increasingly up-tempo and anthemic versions of the song were recorded by Janis Joplin, Hot Tuna, The Byrds and then The Grateful Dead.

But what of the original Woman Blue? Muriel and I dug through the archives in search of her and Muriel created a punch-card for the componium based on Judy Roderick’s recording of the song. This went on to inspire her hand-knitted design, Woman In All The Blues.

We then contacted Lorna. By this point in our project, Muriel and I had produced several punch-cards based on different songs which inspired the Yarnadelic yarn range, and had lots of different research taking place simultaneously. I’d heard Lorna speaking about her knitting machines and the punch-card technology they use, and wanted to see what happens when punch-cards used with music boxes (to produce sounds) are used with knitting machines (to produce textiles). Lorna chose the Woman Blue story to focus on, so we shared Muriel’s punch-card with her along with our research.

In a careful process of honouring and elevating the woman who gave the song to the Lomaxes, and contemplating the historic context of this song, Lorna has produced Woman Blue – Elevate. Worked in Yarnadelic yarn, nylon, lurex and steel rod frames, this work uses punch-cards and machine-knitting to speak to the origins of the song. One frame uses Muriel’s punch-card and Yarnadelic yarn to speak to the different cover versions of the song. Around the patterns of notes based on Judy Roderick’s guitar picking and soft, emotional vocal, Lorna has placed occasional cables, speaking to the twists and turns the song has taken. Over and above this – elevated – is a second piece of knitting, this time worked in transparent nylon yarn combined with lurex (poetically interpreted by subtitling software as ‘lyrics’). For this second, veil-like work, the punch-card used is based on the lyrics given to the Lomaxes by the unnamed Black girl, all those years ago. Lorna has used a system of numbers and letters to produce a pattern rooted in the actual words sung by the unnamed singer which are then hung above – elevated above – the frame representing the cover versions of the song. As Lorna says, “you have to look at the girl’s words and what she said. She is going to have her day of fame”.

This is a powerful piece which addresses the complex layers of this song and its history. This new work utilises machine-knitting as a medium for social commentary in ways which will be familiar if you already know the work of Lorna Hamilton-Brown – AKA The Banksy of knitting. We’ve spent the past week or so working together on a video explaining the concept and process behind Woman Blue – Elevate. It’s based on conversations between myself and Muriel and Lorna recorded earlier this year. It tells the story of the work in Lorna’s own words.

We Gather was commissioned by Dr Karen Patel as part of her Craft Expertise research exploring inequalities and diversity in craft. It features new work by five female artists of Black and Asian heritage: Shaheen Ahmed, Lorna Hamilton-Brown, Omeima Mudawi-Rowlings, Francisca Onumah and Onome Otite. The title We Gather refers to the gathering of ideas, skills and emotions embedded within their diverse craft practices. It is also a symbol of gratitude towards the communities who gathered their courage, bodies, and voices in support of justice for Black lives, which instigated deeper conversations between the UK’s Black makers and the Crafts Council.

Many thanks to Lorna for finding this amazing way to celebrate and honour the original Woman Blue, and to Indiana Hamilton-Brown for the beautiful photos of the work used in this post and in the video.