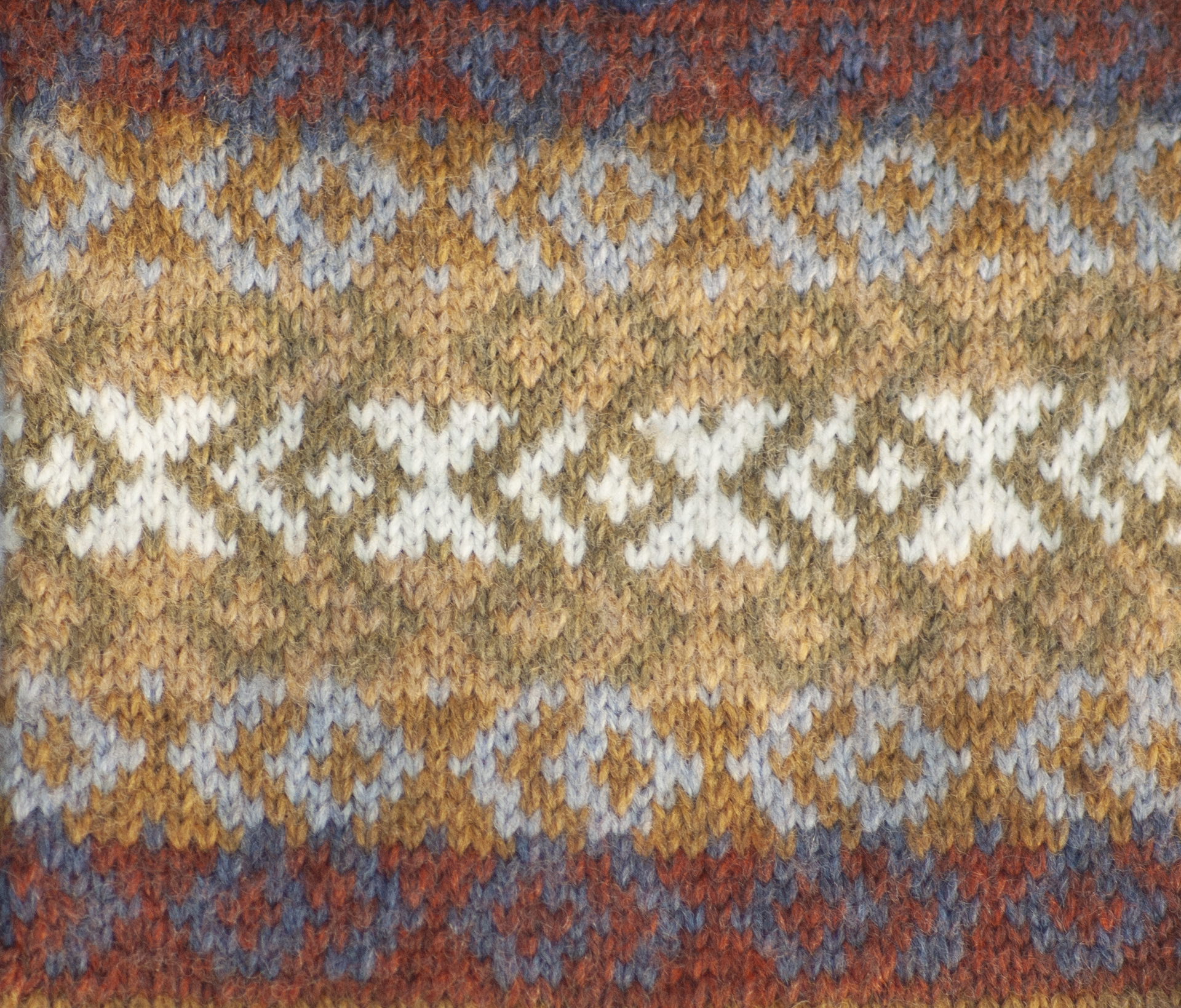 There’s a feeling of calm following what has been a busy time completing work on my Knit Stars 6 Masterclass Handout. It ended up pretty much being a book. What can I say? By the time you write introductory text plus short biographies for twelve artists, then add twelve charts in black and white and colour for three colourways (i.e. 72 charts in total), produce blank templates to customise and colour those same charts, and add explanations of your method the page count escalates… Voilà: your handout is a book.

Today I’m taking a moment to celebrate what I’ve created and it’s made my day to hear from several folks who have already enjoyed what I have made and – above all – found it useful and inspiring: that’s what it’s all about!

There was quite a lot of research that never made it into the handout which I thought I could share here so that everyone can learn a bit about my favourite artists.

Today I want to talk about Jane Allison Wight. Jane’s boundless enthusiasm for brickwork and brick patterns provided the inspiration for this section of the Think Like An Artist cowl – shown here in the Bobby Baker colourway – and I am a big fan of her work.

I always want to write more – to know more – about Jane. Who is this person who wrote about and studied bricks? Who produced pamphlets of poetry on her typewriter in Tilehurst and sent them out via mail-order through the 1970s? Who taught at Reading University? Whose works evidence hours of traipsing around streets and churches drawing tiles, finials and decorative plaques?

Born in 1935 in Suffolk, Jane got her degree here in Reading in 1965 where she lived and worked until some time in the 1980s, when she moved to Norwich. An iconic essay she wrote for a brickwork exhibition here in Reading was recently republished in this excellent book by Adam Sowan. Her published books – Brick Building in England and Mediaeval Floor Tiles are two of my favourite tomes, and searching through the archives of the British Brick Society newsletter – INFORMATION – reveals how regularly she contributed, but also how often her books were cited by other members as sources. Happily, by special request at Reading Central Library, it’s still possible to see the small poetry pamphlets she created at home, illustrated with her many drawings of architectural details, and you can find her wonderful essays specifically about Reading’s brickwork in the Local Studies section of the Reading Central Library.

However, other details – a photo of her, whether she is still alive, what courses she taught, what sort of tutor she was, her role in University life, her significant friendships and peers – remain frustratingly elusive. I think about Jane often and especially when I am walking around the town in which we have both spent chunks of our adult lives noticing and writing about its bricks. I think about how her writing unlocked, for me, a route into understanding and being able to read the bricks at a deeper level of appreciation. And I think about the lack of a Wikipedia page for Jane. That she has no Blue Plaque. That she is not celebrated here as a local heroine for her contribution to this place and our ability to more greatly appreciate its textures, patterns and histories.

I think about Jane every time I return to the wonderful section of the book How To Do Nothing: Resisting The Attention Economy by Jenny Odell, in which the author speaks about “granularity of attention”. To illustrate this concept, Jenny describes a transformation that occurred for her when she began learning all the different bird-calls in her neighbourhood. Increasing the granularity – the detail level – of her attention and learning to distinguish each bird and identify its voice, deepened her sense of connection with them and the geographic spaces that they share. This new knowledge also changed the nature of the attention and presence she was subsequently able to bring into those spaces. Bricks are not birds, but there is something similar at work in how I have learnt to know bricks and brick-patterns beyond surface-pattern interest. If Jenny finds kinship in knowing the birds (which I do as well) then can we make deeper friendships with where we live through knowing the buildings better, too? Jane clearly thought we could and so do I.

In her poem WHY BRICKWORK, Jane waxes lyrical on the chemistry of bricks; their interactions with weather and heat; their “granitic strength”. After celebrating these facts – with which she was more familiar than most people – Jane concludes by marvelling at clay’s ability to record and immortalise fleeting human moments:

Is there need to justify
A country’s traditional material
Also older than history? The units
For handling, as simple and clever as toys?
The logic of chemistry augmented by weather
Making textures and colours – reds and ‘blues’,
Gault white, plum, russet, buff, grey –
People’s redirection as well as choice,
Burning certain clays to granitic strength
And yet less ruthless than concrete?
The touching and leaving Victorian press marks
Or Tudor finger prints, instants
Able to outlast centuries?

I love this poem for so many reasons.

The slightly defensive ALL CAPS title and the long, rhetorical question structure of the poem read to me as a quietly assertive riposte to anyone who belittled or attempted to diminish Jane’s passion; anyone who found it too geeky or too mundane to be of value; anyone who felt challenged by a woman being authoritative and knowledgeable about her area of expertise. As someone who has spent some time in academia and experienced a certain institutional flavour of combined sexism and intellectual snobbery, I have no doubt that as an academic and a woman entering University life over fifty years ago, Jane will have encountered some forms of social pressure and lack of understanding regarding her unusual and – by boring, entrenched, gender normative standards “unfeminine” – area of interest. The emphatic brickwork drawing created with a ruler and framing the poem make me sure of it.

Then there’s the wonderful way that the poem travels through the colours of brickwork and their founding in mineral qualities and kiln technologies but then ends in quite a romantic way, reflecting on the ways in which the permanence of fired clay can record ephemeral, passing moments. I think about this when I pass a section of Reading’s town hall in which there is a brick with a perfect dog-paw print fired into it. This brick tells the story of how, over a hundred years ago, a dog strayed into a brickyard and trod on a wet brick drying in a rack. How many other bricks, in towns and cities the world over, record tiny vignettes like this and how many of them did Jane see in her thorough explorations of all aspects of brick making and brick building?

I love this poem because it merges Jane’s technical knowledge of bricks with her sensual appreciation for its aesthetic appearance and with her ability to connect brick buildings indivisibly with very human stories and social histories.

As well as featuring in Think Like An Artist, Jane Wight is one of the artists whose work I chose to foreground in the Balance for Better Blanket on which I worked with my good friends at KDD&Co.. You’ll find her there in a square that uses the grey-cream and black palette of library photocopies and shapes taken from her drawings of architectural details: arches, windows and ridge-tiles.

Traces of Jane Allison Wight are all over my own writings about brickwork in both the Sourcebook and the Playbook too, as her shamelessly enthusiastic and joyous essays have been invaluable in helping me to understand and contemplate the richness of Reading’s brickwork beyond its distinctive visual patterning. Jane’s writing has opened me up to brickworks’ connections to geography, history, local geology and the sensibilities and trends of the Victorian builders who laid the streets and terraces of our town. Thanks to her work, my endless knitterly fascination with Reading’s brickwork is connected to a much bigger story.

If my determined and continual quest to find out more about Jane Wight bears fruit, maybe you’ll also find Jane Allison Wight on Wikipedia or with her own Blue Plaque, one day. Until then, thank goodness for the photocopies, the typed pages, the saved drawings, the published books – the traces – that this wonderful creative person left behind.

More soon,
Until then –
YOURS IN BRICKS X

Links
Knit Stars 6 – the cart remains open until Nov 4th if you want to sign up to Think Like An Artist and Masterclasses from ten other amazing fibre artists (this is an affiliate link: if you click through and end up signing up for Knit Stars, I will receive commission on the sale, which is a great way to support me and my work).
Jane Wight’s square in the Balance for Better Blanket
Bricks and Brickwork in Reading: Patterns and Polychromy – a book by Adam Sowan in which Jane Wight’s wonderful 1977 essay Patterns in brick is republished
Bricken – a story of mental health and also healing (in which I discuss previous KNITSONIK brick-inspired projects and also mental health)
The British Brick Society Newsletter Archive

Where I have been

12 thoughts on “Why Brickwork”