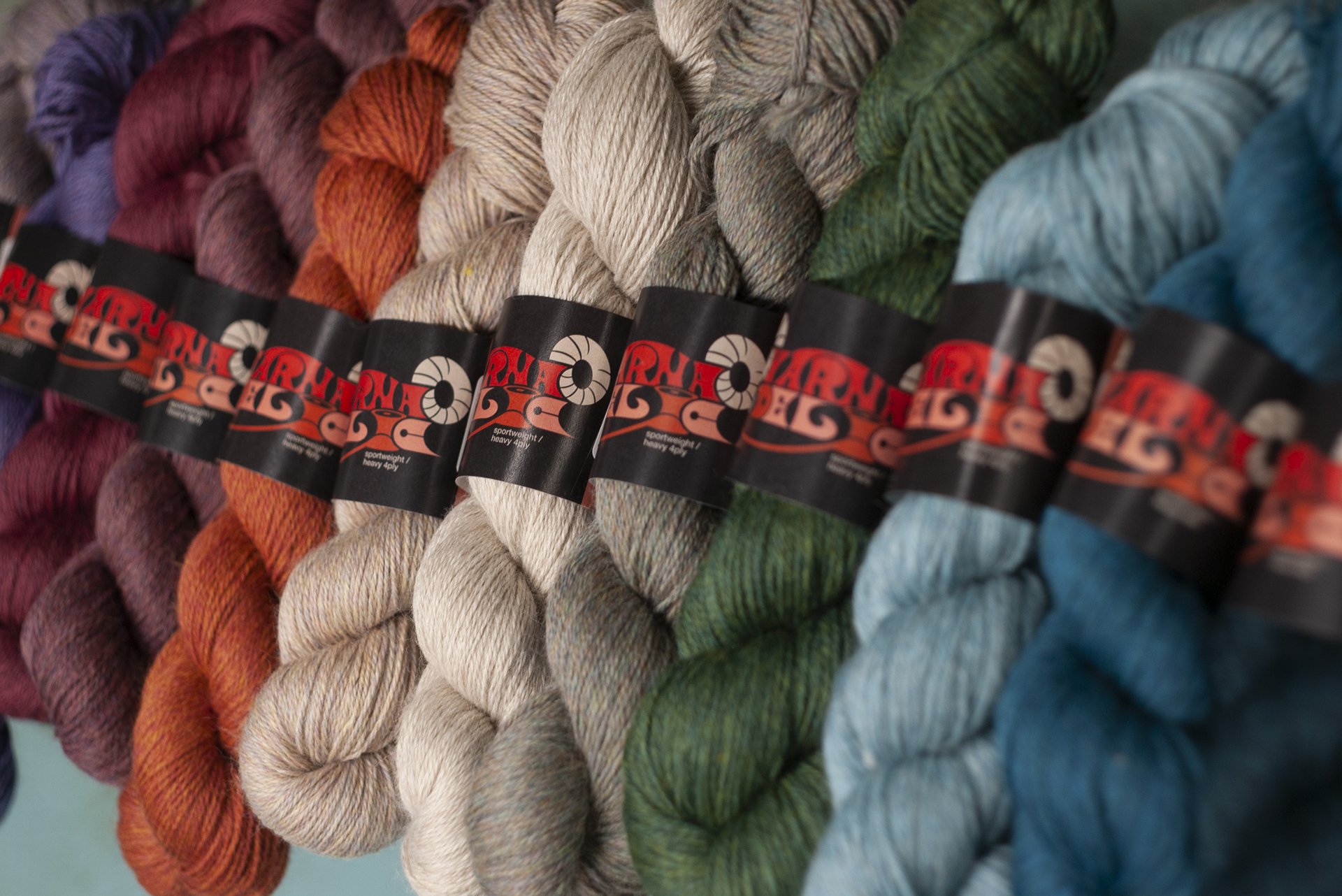 Here at KNITSONIK the project on which I’m working with Muriel continues. I’m pattern-formatting, video-editing, copy-writing and working on our mixes, and our fabulous and incredibly helpful test-knitters (you know who you are <3) are trialling our ideas and giving us feedback. Today I thought I’d pop in to share a little more about the project.

Let me take you back to Winter 2018, seeing Muriel’s glorious musical postcard and acquiring a componium of my own. Once the little box arrived, I experimented with punching cards and getting to understand how it works.

Muriel and I spoke often about music boxes and rhythms and patterns; we watched this superb video about how to programme a music box; and we explored other projects in which programmable music boxes are used in tandem with instructional textile charts – such as the soundweaving project. But it was only when our friends at John Arbon Textiles launched the intriguing Yarnadelic Yarn Range that we both realised what we’d really like to do with our music boxes.

It had occurred to both of us early on that we could sit down with books of motifs and punch traditional knitting patterns onto our cards, then play them to “hear” how they sounded, however neither of us were massively excited about where that might lead. For starters – as so beautifully demonstrated with Muriel’s music box postcard – many of the patterns you might find in a book of knitting patterns use diagonal lines.

Diagonal lines disperse tension through knitted fabric and, in music, they will always sound like ascending and descending notes.

Also, anywhere in a stitch pattern where there is a large cluster of stitches, the equivalent punch-card will sound like a lot of notes being struck all at once. I guess we sort of felt like we knew how it would sound. However, perhaps what put us off more than the predictability of using stitch-dictionaries or existing patterns in our music-boxes was the certain knowledge that doing so wouldn’t push us to knit anything new, or anything personal to us. If you’ve read my Sourcebook and if you’ve followed Muriel’s beautiful creative activities online, you’ll know that what really gets us going is developing patterns through slow and ongoing processes of attention and engagement.

So when we saw the Yarnadelic yarn range – a collection of yarns inspired by songs and released with a special mix celebrating these songs – we detected a delicious challenge: why not take the rhythms and pitches of the songs which inspired the yarns and then use them in our knitting? This way, we would have to learn the songs, find ways to fit them to the many restrictions and limitations of our componiums, and work with the notes and the yarns until they yielded something we’d really like to knit.

We’d root our patterns in the music itself, starting with John’s Mix and the amazing shade-card (which is also a playlist: genius).

There is so much more to say about Yarnadelic yarn but perhaps the best explanation comes from the mill itself in this fantastic video celebrating the one year anniversary of the range. For now it’s enough to say here that since so much of the content and inspiration for our project has come from these special yarns and the songs which inspired them, we have called what we are working on Yarnadelic Remixes 0.1.

The Remix as a form originated in Jamaican Soundsystem culture, New York Disco, and early Hip-Hop. In each instance, evolving technology enabled producers to remould existing material to fit a new set of creative needs. In Jamaica, Lloyd Coxsone and Duke Reid reworked popular tracks into instrumentals over which local toasters could rap; in New York, Tim Moulton extended the instrumental sections in disco tracks to make these parts longer and better for dancing; and Clive Campbell AKA DJ Kool Herc pioneered creative turntable practices which enabled him to isolate and repeat “the break” from different pop records, laying the percussive, instrumental foundations for Hip-Hop. These and other pioneers laid the groundwork for many of the amazing, hybridised musical forms enjoyed today and as music technology has evolved, The Remix has come to more broadly describe any record altered or reworked by producers and DJs.

In Yarnadelic Remixes 0.1 we are remixing songs using the technologies of chart-based knitting, software (music box composer) and hardware – yarn + music boxes – to create musical patterns which will also work in the medium of hand-knit. Because of the limitations of the componium and the limitations of the medium of hand-knitting, the versions of the songs we have produced as “Punch-card patterns to Knit & Hear” are heavily adapted from their fulsome, original musicality. Sampled, mashed up and juxtaposed, the original songs are remixed in this project, by us, into repeatable shapes which can be knitted or played on a componium.

The Remix, as a form, lays the groundwork for positive citation practices in derivative works, allowing originators and remixers to be simultaneously acknowledged. At its best, The Remix celebrates the mutual and collaborative aspects of creativity. We love calling this project Yarnadelic Remixes 0.1 because it acknowledges the huge role the yarn range itself has played in inspiring our work, because it speaks to the generative and playful nature of our work together, and because it suggests future iterations, collaborations and projects – 0.2, 0.3 etc.

Given all the KNIT+SONIK content of this post, this feels waaaaaaaaay too cheesy to say but I’m going to say it anyway: stay tuned for further updates! (groan) there are more to come and, if you have questions, rest assured they will be answered in due course.

Until then, yours in knitting + sounds, and the wonderful news – further to my last post – that Yarn + Stitch is now fully funded and will be going ahead, WOOHOO!
Felix x