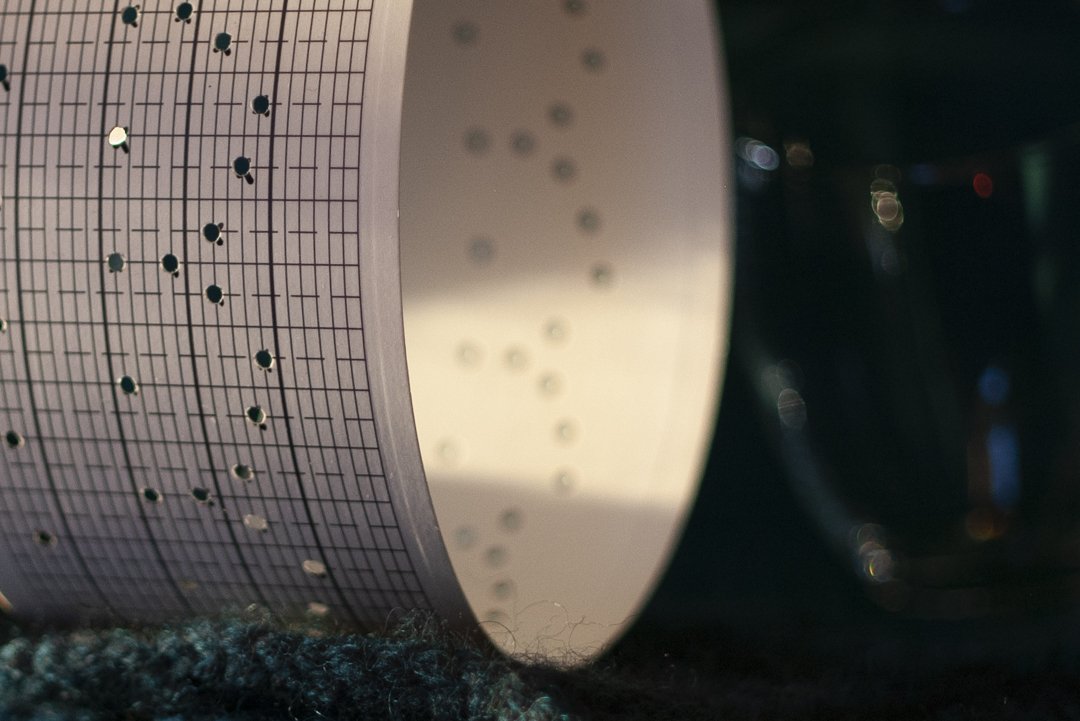 Three years ago I released the KNITSONIK Stranded Colourwork Playbook, one chapter of which details the superlative #KnittedCorrespondence adventures of my friends Muriel Pensivy (France) and Yumi Shimada (Japan).

For #KnittedCorrespondence, Muriel and Yumi took the basic concept of celebrating daily life in stranded colourwork and evolved it into something gorgeous, social and ongoing. Working on small and manageable swatches, not stressing about any outcome beyond the swatches themselves, and in a joyous spirit of curiosity and adventure, they each developed increasingly sophisticated ways to mark time and talk about their lives through stranded colourwork.

From the details of Japanese design as seen in old films…

…to the textures of a beloved family Amplifier, or the flora seen in a local, Tokyo park… Muriel and Yumi found ever-inventive ways to express themselves in knitting, and to share their boundless creativity through social media and the hashtag #KnittedCorrespondence.

Though Muriel and Yumi no longer regularly correspond through the medium of stranded colourwork, the spirit of what they created together lives on in wonderful new ways. For example Muriel has begun a process of turning some of the celebratory ideas found through #KnittedCorrespondence into beautiful things for her, and her family, to wear:

Recently, I have been revisiting these postcards. I want to explore how they can be incorporated into wearable designs, and worked in different yarns from producers and mills whose work I admire. The aim is to create simple, useful and sturdy designs for my family and friends, bearing motifs which celebrate the textures of our lives.

I wrote about Muriel’s first such design – Knit Loud Mitts and Cowl – in this post. Worked in wonderfully sheepy yarns from Daughter of a Shepherd, this design immortalises and elevates the immediately identifiable textures of a Marshall Speaker-Amplifier, speaking to two of the things we both seem to really love: KNIT + SONIK.

Another way in which these things merge in Muriel’s thoughtful and ongoing swatching practice, is in a gorgeous knitted postcard which Muriel produced long after the Playbook was published.

Posted by Muriel on Instagram, this very intriguing and exciting piece of knitting made my heart sing as soon as I understood what it was. Coming straight out of Muriel’s skills and experiences as a music educator, the patterns appearing in the fabric of this unassuming swatch are all based on notes arranged to be played on a componium. As Muriel describes in her post:

The componium is a hybrid between a music box and a barrel organ and the kids love it! As a knitter and a musician I find it really interesting that the music is played by means of a punch-card which is very similar to those used to arrange yarns into patterns on a knitting machine. So I thought it would be fun to knit a chart that I could play on the componium! Here’s my musical postcard for you. You can listen to the music played with this chart in my story 🎶!

I think the design of this postcard and its matching musical accompaniment are genius. There is enough space between the notes on the componium punch-card for them to sound harmonious, like chords, as they are played. And the notes enter and leave in a sequence which lets you really understand how the sound is built up. Lines of holes traveling up and down the punch-card denote ascending and descending scales, while the little diamonds and diagonals which form these sounds also evoke the kinds of shapes which work particularly well with stranded colourwork designs. Diagonal lines disperse tension through or stitches, making for a more even fabric than can easily be created with straight vertical columns. This is why such shapes underpin so many motifs in stranded colourwork – like the traditional and much-loved OXO patterns often found in Shetland knitting.

Muriel’s pattern mirrors the notes found on the componium punch-card but as I soon realised, the punch-card can also be played either way or “mirrored” in the componium, making her swatch a faithful representation of the notes which appear on the card. How magic is this???!!!

I love the crossovers between knitting and sound, but in my own work combining these media I’ve mostly used sound to record and celebrate the provenance of wool itself, and as a way of amplifying the lives, skills and labour that lie behind our quiet knitting materials. For instance in this video I combined sounds from the Shetland wool industry with photos of Shetland wool-workers taken by Tom Barr of KDD&Co. to say something about the people, animals and places from whom – and where – Shetland wool ultimately comes. Muriel’s inspiring knitted postcard also combines Shetland wool and sound, but suggests other ways of combining KNIT + SONIK: ideas based around rhythm, repetition, pattern and pitch… This was about notes we might knit… riffs we might hear and make with our hands at the same time… why, this could be about wearable music! I wrote to Muriel to see if she’d be interested in some form of collaboration, and obtained a componium in order to familiarise myself with its exciting, mysterious workings.

I now have two componiums: one with 20 notes and one with 30. In very simple terms, this is how they work. Inside the componium, there is a revolving mechanism which feeds the punch-card over a set of finely tuned metal pins. Where there is a hole in the punch-card, the pin corresponding to that hole is able to resonate, which produces a note we can hear. When there is no hole, the flat surface of the card prevents the pin from playing, hence we hear no note.

To ensure that the holes which produce the sounds are aligned with the pins in the mechanism, they are punched onto special componium punch-cards which feature a grid. These gridded punch-cards look very similar to those used by knitting machines, and in which holes correspond not to a note being struck, but to a stitch being made in a particular colour, or in a particular way.

As someone who has spent an awful lot of time creating knitting charts – which also use grids – seeing Muriel’s amazing transposition from the grid of the componium card into the grid-like structure of a colourwork pattern made me immediately wonder: what other music could we knit, what other patterns could we find? What knitting, or knitting projects, could we make which – like Muriel’s original knitted postcard – we might also hear? AND WEAR???!!!

We have spent the last eighteen months exploring these questions together, and I am so happy to have found a kindred spirit who is as willing as I am to dive deep into a creative process and get stuck into some serious KNIT + SONIK play. It’s been an adventure involving books about music, listening to songs in a new way, punching holes in componium cards and patching up our mistakes with washi tape… it’s involved re-familiarising myself with the music theory I thought I had left back in the 1990s when I moved away from home and the family piano… it’s involved all kinds of plinky-plonky sounds, attempts to make old tech and new tech work together, and ridiculous and contrived attempts to make complex musical patterns translate into anything we’d really like to wear and proudly share with the rest of the world. It’s pushed us into new directions, into new techniques, and into more permutations of KNIT + SONIK than I think maybe either of us ever imagined. We’ve shared so much over the last eighteen months, and now we’re pulling all the pieces together so we can start sharing the best of what we’ve produced here with you.

The beginning of it all is, undoubtedly, Muriel’s knitted postcard.
I always tell students in my workshop to hang onto all of your swatches: the thing is, you never know where they’re going to take you, or what you might be starting when you cast on with curiosity, heart and imagination.

4 thoughts on “How a Postcard becomes a Project…”